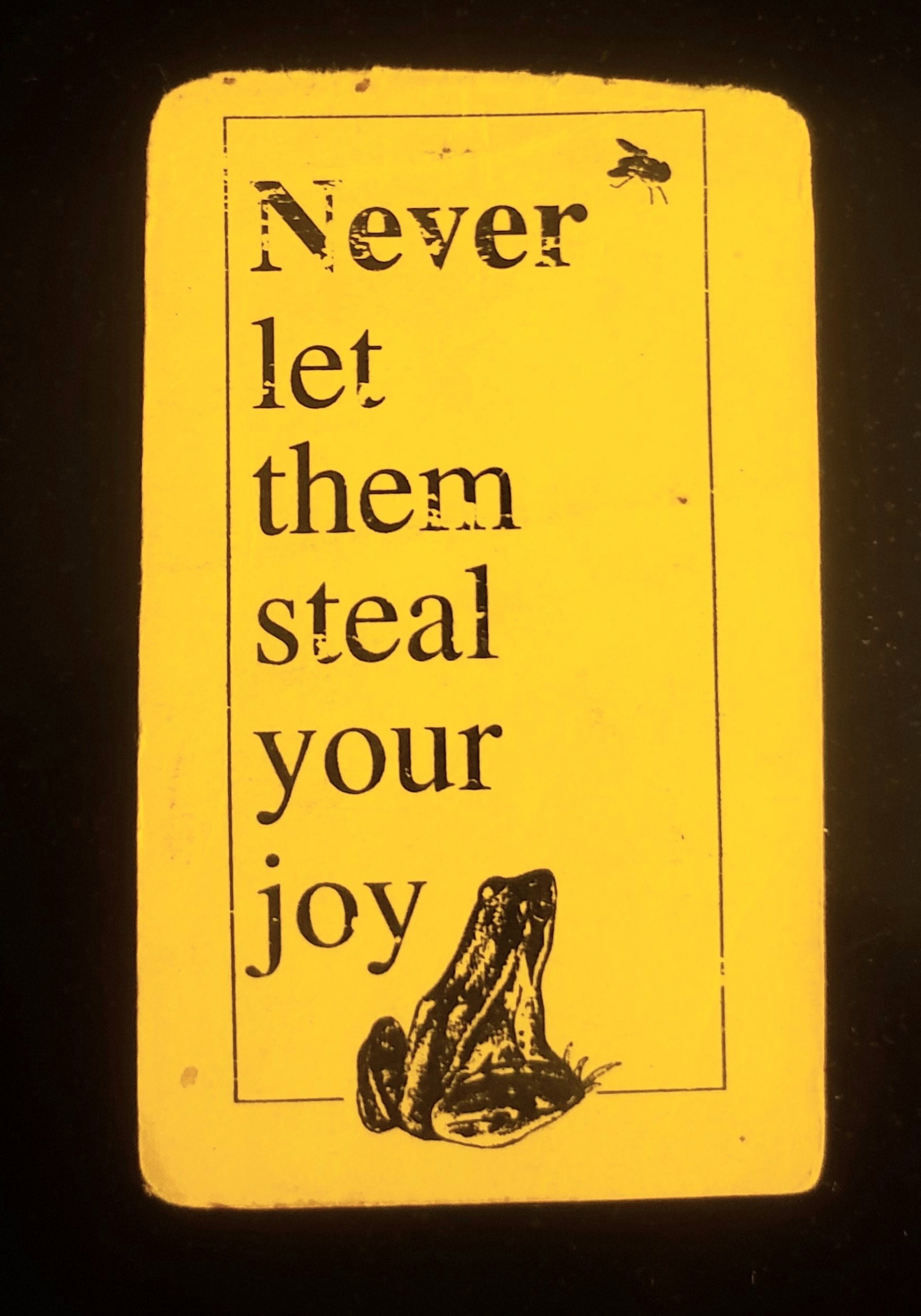 I (Shannon) have had this card (see photo below) in my wallet, since…circa 1998. It is yellow (though not as bright as it once was) and simply states, “Never let them steal your joy”. Bonus- it also has a cute frog on it. While I was at UNC-Wilmington, I worked as a server at a restaurant called “RJ Gators”. I had a friend named, Paul, who also worked there. I had complained about a guy I was dating at the time, school, and who knows what else, for a few days, and one day, he pulled out this card and said, “Here, someone gave this to me a few years ago, and I want to give it to you. Don’t let someone else, or a situation steal your joy!”. It was so impactful, and made me feel all warm and fuzzy inside. I put the card in my wallet, and here and there, I pulled it out when I realized that I needed that reminder.

That same year, I was in downtown Wilmington, and was at the filming of Dawson’s Creek (Fun fact- I was an extra on 3 episodes), and saw Joshua Jackson. Pacey Witter folks, I was freaking! It was before selfies and smartphones, and when I met him, I wanted his autograph and pulled out that card. He signed the back of it, with a note that says, “Thanks for coming out, Joshua Jackson”.

Here we are, more than 20 years later, and I still have that card. It may come as a surprise to you that, as a minimalist, I kept it around this long, but you should also know, if you are a follower of Arner Adventures, being a minimalist means keeping things that bring you joy, and this card, most definitely brings joy. 🙂

I made a big decision recently, purely based on the verbiage presented on this card. In recent years, quality of life has resonated in level of importance and spearheads most decisions I make. I found myself in a situation that not only did not bring joy, but like a thief, it stole the joy right from me. There are only so many ways to make a situation positive before you realize that you can no longer be in a toxic environment, or else it turns you toxic. I did not like the person I was becoming, therefore, decided to remove myself from it, not allowing it to steal my joy.

Today, my joy is back, as I am back on the path of restoring my positive quality of life back to its foundation. I took this card out this morning, looked at it, smiled, and tucked it away until I need the reminder again. I am unsure where Paul is now, and I can no longer remember his last name, but wherever he is, I hope he knows what gift he gave me when he handed me that card, 20 years ago.