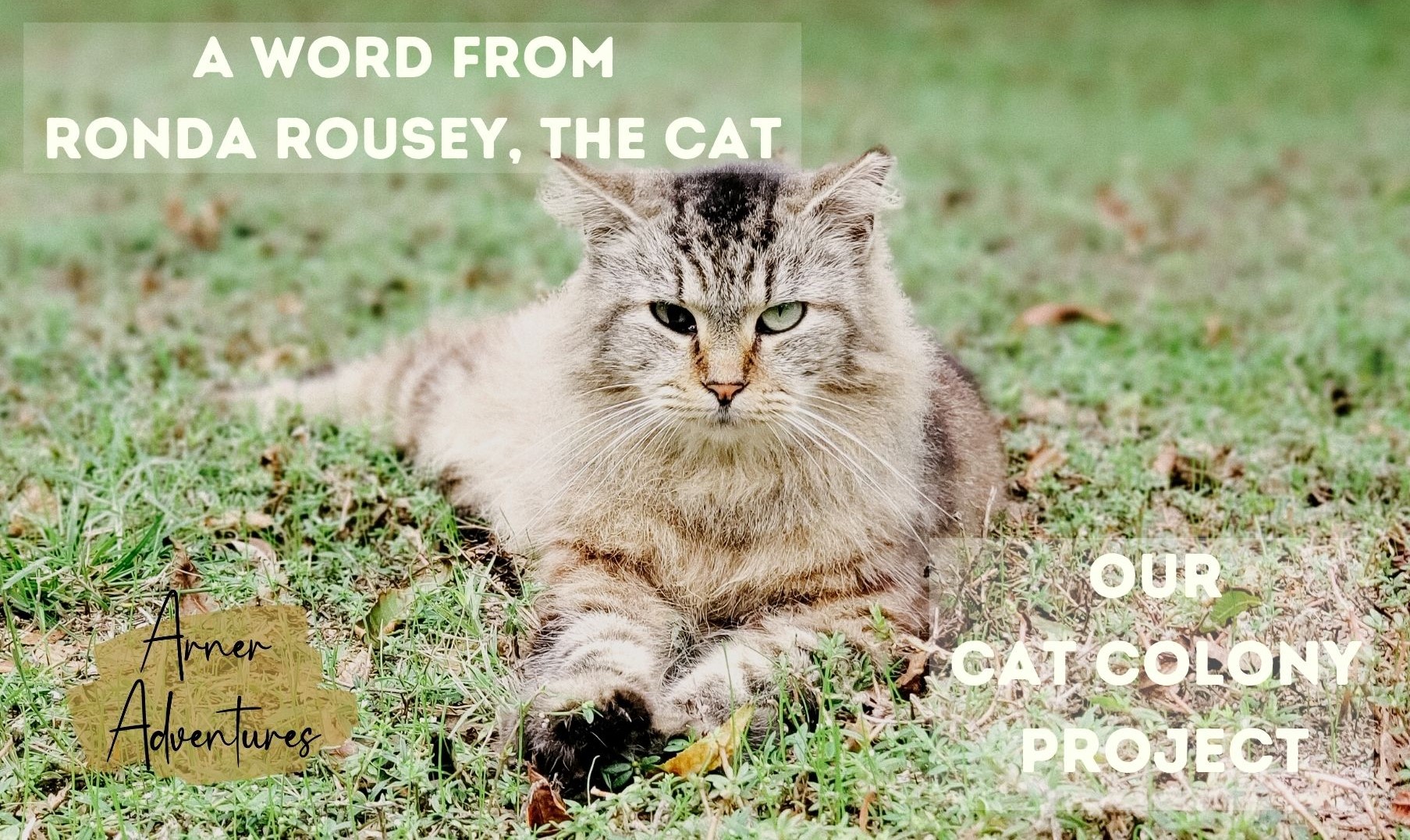 Hi! I’m Ronda Rousey. No, not that Ronda Rousey. I’m Ronda Rousey the cat. I was given this name by The Arner’s when they met me. They said I had a bit of je ne sais quoi, a feistiness, that made them think I should have that name. I didn’t argue. I get it.

Together with my three friends Rondette, Stripes and Blackie McGee, I make up one quarter of our neighborhood cat colony. We’ve been in the area for some time and have had a wide array of people who’ve looked after us. We’ve even been part of a program where we’ve been trapped, spayed/neutered, returned to our little area, so that we don’t reproduce, adding to the feral cat population. The tips of our ears are clipped, so other people from the program know that we’ve already been “taken care of” if you get my drift.

The pandemic turned out okay for us, as it left quarantined humans with more time on their hands to do things like feeding stray cats. In the summer of 2020 a new couple, Shannon and Gerry moved in across the street from our colony.

We have a detailed vetting process in place before letting any humans into our lives. Somewhere over the fall and winter, Shannon and Gerry became part of the group to step into our wooded encampment and offer us food every so often. They found out who owned the land we had called home for years,  just to make sure that they obtained permission to feed us, from a legal standpoint. Their trips became more frequent until the summer of 2021, through a series of incidents with some people who are not the biggest cat fans (I know, I know, who are these people) the four of us decided to take up residence across the street in the Arners’ backyard. We split time between their neighbor, and them. We jump the fence to go back and forth. This has worked out wonderfully for the better part of 2021 as we have fully taken on the Arner’s as our humans.

Part of the colony remains across the street, in our former encampment, as they’re not quite as adventurous as the four of us are and feel more secure in the wooded lot I originally called home. I go to check on them almost daily and folks still feed them and have provided a cushy nest of magnolia leaves for them to bed on.

Recently a new problem arose. The backyard of the Arner’s contains an old barn that had been ignored for quite some time, before the Arner’s arrived. Last month a rodent was spotted and a process started to get the barn cleaned for us to live in during the coming cold months. The plan is for us to police the area for rodents. We will do so happily. The situation is a win-win for the Arner’s and us.

In case you’re not aware of a cat’s presence around rodents, please allow me to explain. We are a natural enemy to them. Rodents are a highly-capable sponge for disease and can carry a number of diseases back to where they live. In recent years, many animal rescue groups in big cities have started programs to group feral cats in rodent infested areas to stabilize the populations. The results have been amazing. The Arner’s decided to do just that for my little foursome.

They cleared out and cleaned the old barn where the rodents were spotted and set up bedding and started to feed us there. The goal is for the four of us to keep shelter in the old barn during the cold weather months and simultaneously control the rodent population. It’s said that even the slightest scent of a cat will drive rodents away and we’ve been working hard to put our scent all through our new home.

We’ve been working as exterminators since the dawn of agriculture 10,000 years ago, when we began helping farmers to get rid of rodents. Here’s to good times ahead with our adopted humans and keeping their barn rodent-free! They don’t call me Ronda Rousey for nothing.