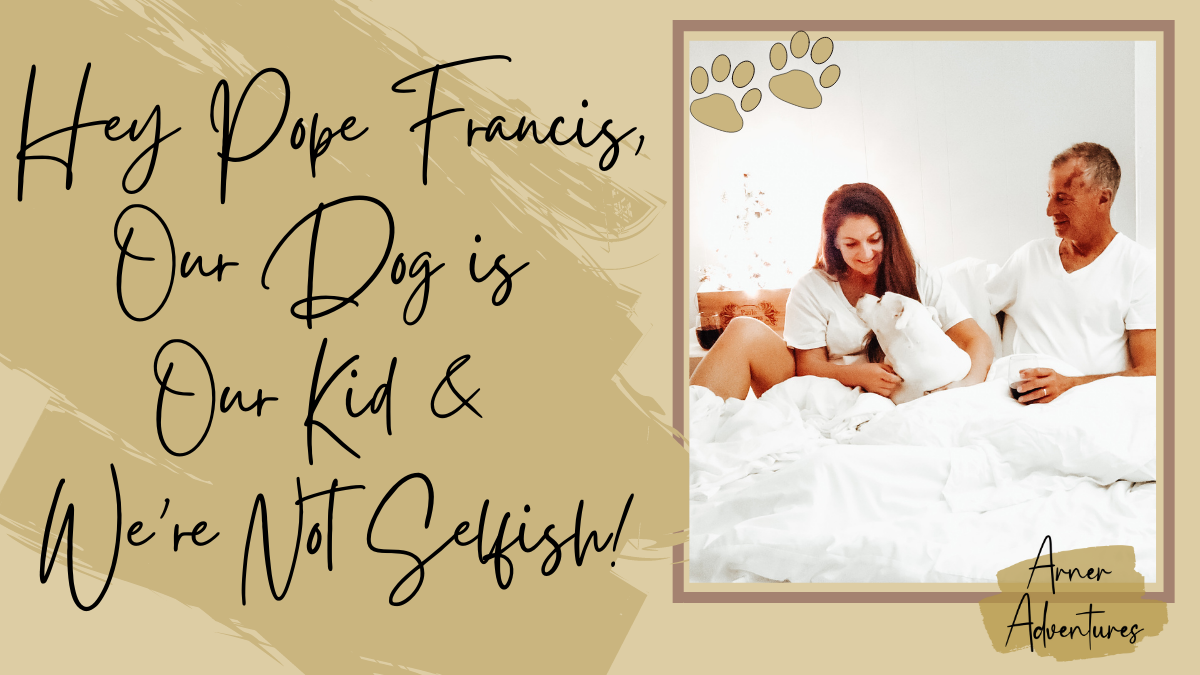 You may have seen Pope Francis proclaim a few weeks ago that people who opt to have pets over children are selfish, and are taking away from humanity. You can imagine the jaw-dropping reaction we had to this, when we were prone to liking this Pope, though not Catholics ourselves, we admired His Holiness remarking to a young boy in 2014 who was grieving the loss of his dog that “One day, we will see our animals again in the eternity of Christ. Paradise is open to all of God’s creatures.” How could the same Pope turn around just a few years later and say that people who choose to give a loving home to pets, and choose not to have children, for whatever reason, unknown to him, are selfish? Hey Pope Francis, Betty White, our pup, is our kid, and we’re not selfish people.

What Were the Pope’s Reasons for Saying This?

Pope Francis addressed a congregation in Paris in early January, regarding several topics, of course the hot topic at hand, people opting to have pets instead of children. We think it’s apples and oranges, but we’ll get into that in a few. The Pope went into his concern that people who choose not to have children are contributing to the destruction of “our homeland”. He inquired of the crowd, “How many children in the world are waiting for someone to take care of them? Having a child is always a risk, either naturally or by adoption. But it is riskier not to have them. It is riskier to deny fatherhood, or to deny motherhood, be it real or spiritual.” Huh?! We wonder, a man who has no children himself (or at least none that we know of) how many childless couples has he discussed this with? We ask ourselves if he has really had conversations with couples who chose not to move forward with being parents, and their reasons for not doing so. Also, having pets instead of children? Let’s talk about that.

We adopted Betty White, and all of our previous pets, because we wanted to give a rescue pet a home, a better life. It was never a discussion about having pets instead of children. We did have a discussion about whether we would move forward with having children or not, because frankly, it was a biological clock issue, but it’s never a “this or that”. How many homes have both? PLENTY!

From a religious standpoint, it should be noted that he never brings up Jesus, and his view on this… hmm…. just saying.

Not that it matters, but for argument’s sake, there are a million reasons that people choose not to become parents, or as many call it, being “voluntarily childless”- GEEZ! Guess what, it’s similar to how many people choose not to live in Minnesota, or choose not to drive a truck. Why does it matter? People choose to live their lives a certain way and it’s not up to us, the Pope, or you to determine if their life is the right way or not, as long as it is not hurting anyone. Let’s address some of the reasons though, just in case anyone is wondering why.

Being a Pet Parent is Not Selfish

With all of that being said, yes. Betty White is our child, and all of our pets have been our children. We feel that by caring for animals, you are most definitely not selfish. In fact, we truly cannot think of anything in our lives that has been as selfless as the time and devotion that we have given to the lives of the pets we have had the honor of spending our lives with.

There is a term that is on the rise in today’s society, “interspecies family”. Ok, don’t get weird, this is the mutual, non-sexual relationship that families have with animals in their home, i.e. dog, cats, etc.We consider ourselves a family in our household, and cannot imagine it any other way. We all provide companionship towards each other, emotional support, and unconditional love. We would imagine it is the same way with human children. We provide shelter, food, medical care, exercise, nourishment, and love to Betty White. Despite the reasons we chose not to have human children, we can most definitely say that we are not selfish people, regardless of what Pope Francis says. There are a plethora of people, organizations, groups, companies, who take advantage of people on a daily basis who are selfish, that His Holiness could have taken a few minutes to point out, but instead, he took the time to ridicule people who save animals.

What we can say is that we cannot imagine becoming parents due to an obligation to the Pope, guilt, or to humanity. We chose the path we are on because it is what we feel is right for us; we wish that for anyone and everyone, without judgment.